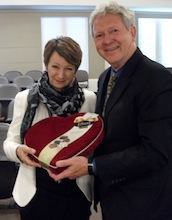 One of the first things tyrants try to do when they take over is to try to commandeer history, said keynote speaker Neal Pease at the fifth Annual Meeting & Career Development Day of the Polish American Librarians Association February 22 at Dominican University, and libraries and archives are the keepers of the record that scholars and historians need to tell the true story, he advised. A professor of history at the University of Wisconsin at Milwaukee, Pease reviewed the “turbulent, tragic, and triumphant” 20th-century history of Poland. His review reminded the audience of the job they have before them in representing in library collections Poland’s central role in the shaping of contemporary Europe.

“The keynote speech reinforced PALA’s mission, which is to positively impact services provided to library patrons of Polish descent and individuals interested in Polish culture,” said Aldona Salska, returning PALA president and a PALA founder. “Although meeting attendance was down, enthusiasm was up, and this is probably the best conferences we have ever had. Some of the thanks must to go to the host, the Graduate School of Library and Information Science at Dominican,” she added. A PALA founder, Salska was drafted back into the presidency when president-elect Joanna Klos was forced to relinquish the post for personal reasons. Salska’s brief but punchy speech at the meeting was a call to action and a realistic look into the organization’s past and future.

“PALA has existed for five years,” Salska said. “Small organizations like ours usually begin with a few good ideas and a few people who have the enthusiasm to develop those ideas. When organizations get to be five, or six, or seven years old, they have to ask where the good ideas have led and how they can be sustained.”

Salska went on to say that during her presidency she will concentrate on three things: services, finances, and enthusiasm. “Here are three questions that I want to put to all of us,” she said. “Can we provide the services that would make PALA a truly valuable organization? Can we find sources of funding other than membership fees to support the good ideas that we have? Is there the enthusiasm in our membership to continue to work to make PALA a vibrant and valued organization?”

During the meeting, attendees were invited to respond to Salska’s call to action and to discuss over lunch the types of activities or programs PALA should be involved in or sponsor. Responses centered on making the website more interactive and stocking it with useful content, increasing partnerships with other Polish organizations, developing mentoring programs, and offering continuing education including webinars and workshops. Salska takes over the reins from Ron Stoch, during whose one-year presidency PALA achieved tax exempt status.

“Dominican has had a strong relationship with PALA,” says Felice Maciejewski, director of Dominican’s Rebecca Crowne Library, referring to its role as administrator of PALA’s three-year Vera May Zubrzycki Scholarship 2013-2015. Maciejewski was the on-site organizer of the meeting, and GSLIS director Kate Merrick was on hand to welcome attendees.

Some 40 people from Illinois and Wisconsin attended the day-long meeting, and Pawel Stefanski of the Polish Library in Washington D.C. also attended and spoke briefly about partnership potential. The Polish buffet luncheon was sponsored by the Consulate General of the Republic of Poland in Chicago and catered by Kasia’s Deli.